You are here: Home / Forex Tutorials / A Simple Buy and Sell Indicator for Long-Term Investors 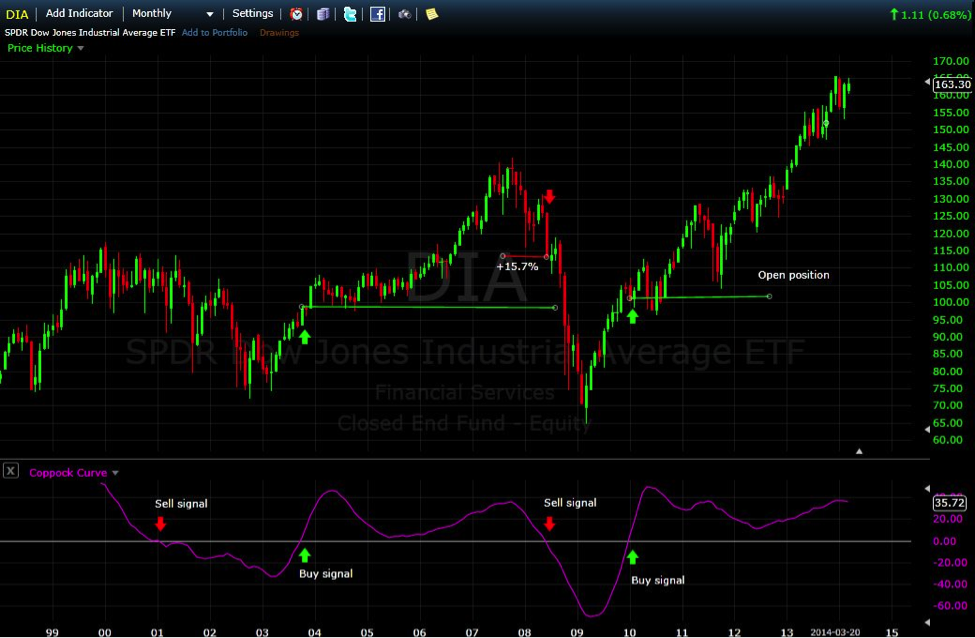 A Simple Buy and Sell Indicator for Long-Term Investors

It’s called the Coppock Curve – a rarely spoken of indicator that works quite well at providing long-term buy and sell signals for ETFs linked to major indices, which provide an easy way for investors to access a basket of well-known stocks. Using the Coppock Curve in conjunction with major index ETFs provides a simple solution for investors who are concerned about large drawdowns in their portfolio during major stock market declines. This method results in trades lasting 4.5 to 10 years, and has captured the bulk of trending moves since 1991, while also avoiding a significant portion of the crashes [see A Brief History of ETF Bubbles].

What Is the Coppock Curve?

Developed by Edwin Coppock, the indicator was originally designed to provide long-term buy and sell signals in major indexes, such as the S&P 500 or Dow Jones Industrial Average. With the proliferation of ETFs, the indicator can be easily applied to a monthly ETF chart to isolate when major trends are underway, and when major corrections are occurring.

The Coppock curve is an oscillator, moving above and below zero into positive or negative territory. It’s based on two rate-of-change (ROC) calculations – a shorter one at 11 periods, and a longer one at 14 periods. Using monthly charts, the indicator is looking at the ROC over 11 and 14 months; then, a weighted moving average (WMA) of 10 is applied to the ROC calculations, creating a signal line indicator [see How to Take Profits And Cut Losses When Trading ETFs].

Luckily, none of these calculations are required on your part. You just need to know how to interpret what the line is doing once you apply the indicator to your monthly chart.

For those that are mathematically inclined, here’s the formula:

Trading ETFS with the Coppock Curve

The Coppock Curve provides a straightforward interpretation for investors. Pull up a monthly chart of the S&P 500 SPDR (SPY,A) or Dow Jones Industrial SPDR (DIA, A) (or other major index ETF) and apply the Coppock Curve to your chart. Since sometrading platforms may have different settings for the indicator, make sure the settings are similar to those in Figure 1, with the short ROC at 11, long ROC at 14, and weighted moving average (WMA) at 10. Please note that all of the charts in this example were made using FreeStockCharts.com.

Following this method, investors would have participated in the market boom of the 1990s, but avoided a significant portion of the drawdowns seen in 2001 and 2002. A good portion of the rally heading into 2009 would have also been captured, while an exit occurred right before the major declines later that year. Most recently, a buy signal occurred in 2010, and as of April 2014, that trade remains open with a large profit [see 3 Market Valuation Indicators ETF Investors Must Know].

Figure 3 shows the trades in the Dow Jones Industrial ETF (DIA); because this ETF hasn’t been around as long as SPY, there are fewer signals over its history.

Alterations to the Coppock Curve

The Coppock Curve has three adjustable variables: a weighted moving average of two Rate-of-Change calculations, and then the two actual Rate-of-Change figures. Below we outline some of the various alterations that investors may wish to consider before putting this indicator to use:

The rate of change variables are often manipulated by more active traders focusing on shorter timeframes, such as the weekly or daily chart.

For investors, the monthly chart works best, with the short rate-of-change set at 11, long rate-of-change at 14 and the weighted moving average at 10 (default settings).

The default levels chosen by Coppock may seem a bit random to some, as they are based on an Episcopal bishop’s statistics on the mourning period of a lost loved one. While the indicator works on historical data, that doesn’t necessarily indicate similar future performance [see 7 Rules ETF Day Traders Must Know].

A false signal is the main potential drawback of this indicator. It occurs when the price crosses either above or below zero, only to quickly cross back the other way. This creates confusion and trades in quick succession, which is not ideal for an investor; from 1995 to 2014, this was not an issue, but it is possible that it may become a nuance in the future.

The Coppock Curve is an indicator created for investors who want to capture major trends lasting years, but also want to avoid the significant drawdowns associated with the long-term stock market cycle. The indicator works best on monthly charts when using major index ETFs. The biggest drawback is false signals; that is when an investor is forced to sell and buy back (or vice versa) in quick succession. If trading on a shorter timeframe, the indicator may be of use, but the settings will need to be adjusted and the trader will need to make sure it was profitable in the past before utilizing future signals. Remember that with any indicator or strategy, past performance is not a guarantee of future returns.