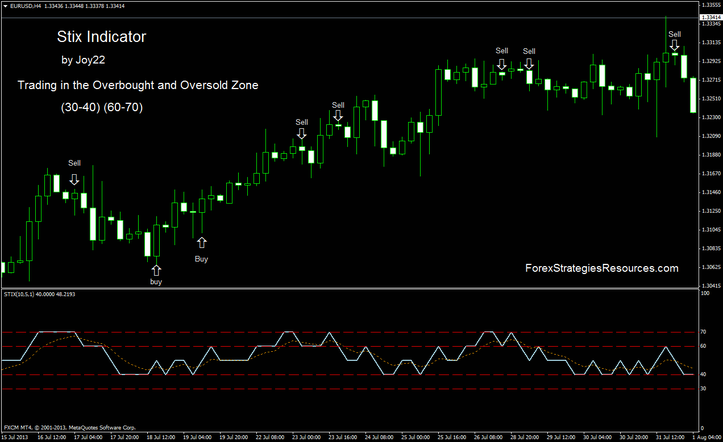 This version of Stix indicator has been adapted for the forex by joy22.
Stix indicator no repaint.
STIX indicator is a short-term trading oscillator that was published in The Polymetric Report. It compares the amount of volume flowing into advancing and declining stocks.

Interpretation
According to The Polymetric Report:
STIX indicator usually ranges between +30 and +70.
If STIX indicator gets as low as 30, the market is almost always a buy, except in a raging bear market.
The market is fairly overbought if STIX rises to 70; and except in a new bull market, it’s wise to sell if STIX should go over 70.
Traders and investors should modify these rough rules to suit their own objectives.
In normal markets, STIX rarely gets as high as 70 or as low as 30, so rigid use of these rules of thumb would keep you inactive most of the time. For active accounts, the rules might be made much less stringent.

Calculation
STIX is based on a variation of the Advance/Decline Ratio:
The STIX is a 21-period (i.e., 9%) exponential moving average of the above A/D Ratio.